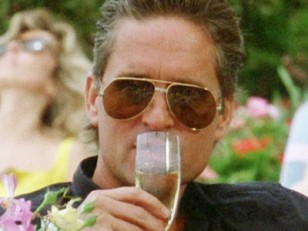 In both the first and the second Wall Street film, Gordon Gekko also wears a wristwatch by Cartier, a gold Cartier Santos with white dial and Roman numerals.

The same model glasses, Cartier Vendome Santos, was worn by Christopher Walken in the 1985 James Bond film A View To A Kill.

Thanks to John Smith for the suggestion