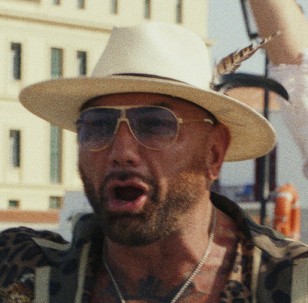 The 1005 model by Carrera is available in many colors, but Bautista wears the version with gold-tone metal with white acetate arm tips.

These gold Carrera 1005 sunglasses are now available on Amazon for only $50 or find them on eBay for around $44.

In Glass Onion, the sequel to Knives Out, Dave Bautista plays Duke Cody, a YouTube star and men's rights activist.

This not the first time Dave Bautista plays in the same film as Daniel Craig: they were both main characters in the 24th James Bond film SPECTRE in 2015.